Bolt 3 is housed within LaCie’s ground-breaking aluminum design for easy installation and exceptional reliability. Its internal parts have been carefully constructed to give you nothing short of the best performance for your increasingly demanding projects:

Unlike standard hard drives (HDDs), SSDs are not mechanical devices and they do not have moving parts. With an SSD, users can stop calculating revolutions per minute for data seek rates since it is composed entirely of NAND Flash. Thus, accessing data on an SSD is considerably faster than an HDD. As with most comparisons, the increase in speed is based upon the types of SSDs and HDDs as well as the throughput of the interface. However, SSDs have proven to be faster and are increasingly available in storage, mobile and computing devices.

At the heart of Bolt 3’s incredible performance is two PCIe Gen 2 SSDs. Most standard multi-disk enclosures that feature SSDs or HDDs share a SATA bus. No matter the version of SATA, the drives are limited to a fixed number of channels to pass data. However, each PCIe Gen 2 SSD has its own bus which helps to limit data bottlenecks from multiple drives. 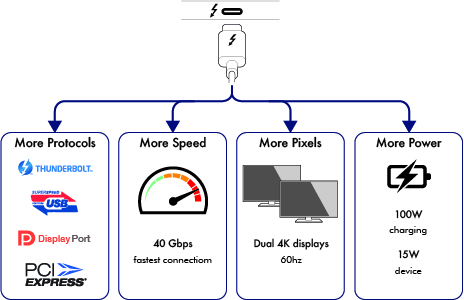 Thunderbolt 3 uses a USB-C connector specially labeled with a thunderbolt. Since Thunderbolt 3 is protocol agnostic, it supports connections from:

Non-Thunderbolt 3 devices that feature a USB-C port can be connected to Bolt 3 to terminate a daisy chain and, if compatible, to take advantage of the power delivery option for charging batteries.